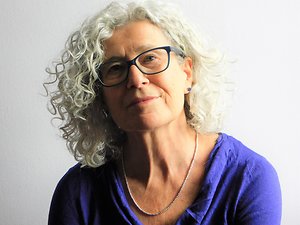 Before becoming a counsellor, I had a career in journalism and documentary film making, spending ten years living and working in some of the most troubled areas of Latin America.

Returning to the UK as a single parent, I became involved with Parent Network, an organisation which was dedicated to improving relationships between parents and children. I learned principles of communication, such as listening with respect and empathy, and assertiveness without aggression. I saw my relationships with others improve as a result.

The philosophy of Parent Network incorporated the ideas developed by Carl Rogers, a pioneering psychologist whose non-judgemental approach to interpersonal relationships was life changing for me.

I made the decision to train in the person-centred approach that Rogers developed, a process of personal growth and change which engages the whole person, mind, body and soul, not a set of techniques designed merely to change behaviours.

While training I worked for a bereavement service. After qualifying I worked at 3 major London hospitals as Women's Health Counsellor, dealing with the emotional and psychological consequences of pregnancy loss, fertility difficulties and gynaecological issues. I have also worked with the Alzheimer's Society counselling staff, carers and people with dementia. I have had specialist training which has equipped me to work in these fields.

I established my private practice, One to One Counselling, in 2001. Since then I have worked with many individuals and couples as their counsellor/psychotherapist, helping with a broad range of issues.

If this has interested you, you can find out more here.

©2022 Jackie Reiter Counselling is powered by WebHealer
Cookies are set by this site. To decline them or find out more visit our cookie page